An Embarrassment of Riches

One of the things that defines the initial run of HiG (issues 1-5) was that we were constrained by the availability of the games. HeroQuest and sort-of RuneQuest 3 were the only options.

Now as of last month we have four options:

RuneQuest Classic (or RuneQuest 2). OK this one is perhaps for the Grognards or playful folk like me that want to enjoy a barebones Gloranthan experience, with minimal rules. The adventures The Secret of Duck Hill (in the last issue) and The Golden Gorp (see page 36) are the results of me just using the reissued RuneQuest Classic rulebook, so there is a lot of mileage here.

HeroQuest Glorantha. It seems strange that there’s not a HQ adventure in this issue since it was the workhorse of the last ten years. On a personal level its time for a break but I’m sure that it will be back. HeroQuest does BIG DAMN HEROES/HEROINES like no other system on Earth. If you’ve not come across HeroQuest before, Ian Cooper current HeroQuest Line Editor at Chaosium goes over what makes it so unique in his article Who Gets to Speak (page 18).

13th Age Glorantha. Familiar with D&D? Particularly modern feat based D20? Well, this is your stop. Mixing the narrative-driven 13th Age rules and a fair bit of rules tinkering to make it more palatable to us established Gloranthan fans. Of all the four rulesets perhaps, it’s the most accessible and directed. From word go it has even 1st level characters as larger than life people on Hero Quests. There’s also a lot of fun stuff, such as troll characters and Eurmali Tricksters, that you get to play right out of the first book. This is probably going to be my next game after I stop mucking about with RQ Classic, but my mate Guy Milner is way ahead of me having run The Beard of Lhankor Mhy (see page 23) multiple times at conventions.

RuneQuest Glorantha. Using RQ 2 as a base, and drastically upping the page count to cover the entire Dragonpass region in detail, this is the 400 plus page titan that fans have been wanting from the old days. The classic game expanded and updated with a rock solid Gloranthan base. While I’m still ploughing through the pdf of the main rulebook, Stewart Stansfield has charged ahead and used the Duck stats from the Bestiary Preview that Chaosium has made available as a taster for the full book available later this year and created Slipbeak a Seven Mothers Initiate and Lunar sympathiser (see page 16).
So there’s no longer any excuse. Get out there and play, create and submit the results to Hearts in Glorantha 🙂

All the above games are available from Chaosium.com and Hearts in Gloranthan issue 7 is currently on pre-order via the D101 Web Store.

The Coming Storm is here!

Ian Cooper’s Red Cow Saga aka The Coming Storm is out in pdf form via Chaosium.com.  If you buy the 150 page pdf now they will deduct the cost from the printed version when it comes out later in the year (no eta yet).  This part 1, which meticulously details the Red Cow, their lands and their enemies (lots of maps and character portraits as a result), while part 2 which should be along shortly is all the adventures.

Join in the discussion with author Ian Cooper over on Rpg.net. Ian gives lots of detail about the supplement, for example why its been split into two parts, and is open to questions.

Here’s some page layouts, which give the table of contents, that Ian posted on the above thread.

and of course Jon Hodgson has turned in another awesome iconic cover for the book. 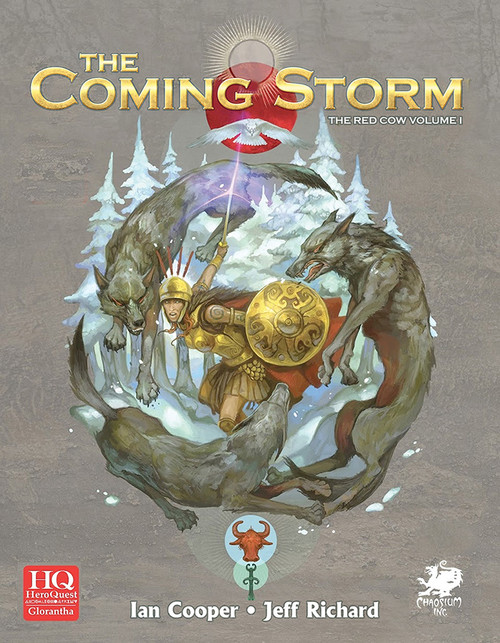 Simplifying not dumbing down

So I’m preparing my pitch for the 7 Hills Convention in April, where I’m going to unleash my mega-adventure for HeroQuest Glorantha upon 4-6 players.  Even if the players are familiar with Glorantha I want it to be mega-fun rather than mega-complicated, because even with a four hour slot I’m not cramming in 16 hours + of my home campaign (with all its plot twists and stuff that my players have painstakingly built up), I’m creating a sandbox with story seeds and plot threads that the players can pick up and have fun with.

So with this in mind I launched into writing my pitch. I came up with two versions, a long pitch (approx 300 words) and short pitch (approx 200 words).

At the Dawn the land of Karia was made the Centre of all the World’s Religions by Nysalor the the New Sun. Here this glorious mortal-made God created a special temple to celebrate the mystries of the five elements – Water, Air, Darkness, Earth and Fire. When Nysalor betrayed his worshipers and all creation by revealing himself to be the chaos God Gbaji the Deceiver, the hero Arkat Chaosbane revealed the Temple of the Elements’ true purpose ad been created to enslave the elements and channel the worshipers magical energy to Nyslor himself. Then Arkat and his armies destroyed the Temple and ravished Karia, suppressing many vile chaos cults in the process. Arkat would finally forsake his human form to take on that of a Troll to defeat Gbaji in the far off land of Dorestor. Even when he returned to the west as a human to establish his Dark Empire, Karia remained silent and haunted by the destruction he had wrought there.

Now in the Third Age, King Aruzban Ironarm of neighbouring Delela has declared the old Undying curse of Arkat broken by his hand, and that life has truely returned in its fullness to Karia. He has encouraged his tribesmen to inhabit the land, of which they have taken the lower third. Heretics from the Duchy of Naskorion to the west have also settled in the land, as have Trolls from the Queendom of Halikiv. An uneasy peace exists amongst these traditional enemies, and its focus is the city of Watcharkat. Here a group of followers of the various faces of Arkat, who call themselves Arkat’s Council, watch for the re-emergence of old magical enemies. Their mystics foretell the rediscovery of the temple saying in the present “one day the Five Pillared Temple of the Elements will be discovered and there in the sacred precincts Gbaji will be arisen”.

I wrote the long pitch almost automatically, straightout of my head which is crammed with 30 odd years of Gloranthan knowledge. I sat down to revise it and realised that it was confusing even to me, and instead wrote the second Short pitch.

In the time of the Dawn there was a powerful temple in the land of Karia, called the Temple of the Elements. It was a peaceful place where followers of the man-made god Nyalsor the New Sun, contemplated the mystic energies of the five elements – Fire, Earth, Air, Water and Darkness – that had created their god.

Then the god-slayer Arkat, came with his armies from the West. He said the temple filled with falsehoods, their peaceful meditation were merely studies in enslavement and Nysalor was actually an evil god of Chaos called “Gbaji the Deceiver”. He destroyed the temple and slaughtered its worshipers. Since the five pillars of the temple were created by a god and beyond his means to smash, he buried them.

It is now the Third Age and Karia is being gradually resettled by people from neighbouring lands. In the city of WatchArkat the Council of Arkat, a group of powerful monster hunters, live in plain sight amongst their enemies in an uneasy truce. Only they know the prophecy

“One day the Five Pillared Temple of the Elements will be discovered and there in its sacred precincts Gbaji will be arisen”.

This is the pitch I’m going with. Not only is it quicker to read, which is important since folk will either be reading it on the website (always write at least 25% less for the web) or quickly on the signup sheet on the day. The first pitch falls into the trap that it mentions too much that is really out side the scope of what I should be telling folk in an introduction. Its contains detailed background information that the players may never even discover in game (although I’m now intent on putting in King Aruzban Ironarm with his Troll crushing arms in the scenario some how). Its the sort of show off info-dump that I might show to a fellow Glorantha-phile in the vain hope of impressing them. Pitch 2 is mega-complicated while Pitch 1 is more mega-fun. It sets the scene of the Temple and its importance in the fight of Nysalor vs Arkat, and its link to the horror god Gbaji both past and present. Best of all it points out the player characters are “a group of powerful monster hunters” :).

After a couple of years of inactivity, D101 Games presents not one but three Gloranthan Fan titles.

Hearts in Gloranthan vol1 Collected. This is 280 pages of the first five issues of Hearts in Glorantha (HiG), a fanzine dedicated to Greg Stafford’s mythic fantasy world of Glorantha, that were published between 2008-2012. The original articles, which cover setting information, creature write ups, adventures, homelands ,fiction, and rules guidance for both HeroQuest and RuneQuest, has been tidied up and 22 pages of new material about the Balkoth Tribe of Sartar has been added exclusively to this collection. Features articles on the Lunars, Chaos, Oceans and Seas, Sartar, Dragonewts, Dwarves & Ducks??!?!

Gloranthan Adventures 2 Red Sun Rising. A complete mini-campaign set in the Lunar Dara Happan city of Serris, a tough independent city which lies in the shadow of the Red Moon. Although written for HeroQuest it has converstion guidelines for RuneQuest.

OpenQuest Adventures. This book is an eighty page collection of scenarios and articles designed to show how OpenQuest can be used for different flavours of fantasy gaming. Within its pages you’ll be able to visit Ancient Rome, enjoy a short dungeon crawl, experience the horrors of a small hell and even the joys of the original D100 adventure setting Glorantha!

Also Gloranthan Adventures 1: New Beginnings is now available in print via DriveThruRpg.com for the first time.

Go grab them at these following outlets

I’ll be reviewing this in two parts, a read through review and a playtest review (I’m running it this coming weekend at 7 Hills gaming convention in Sheffield )

The Breakfast of Heroes!